Welcome to The International Basketball Opinion, the world’s only blog specifically dedicated to international basketball news, business and current events.

It was announced this week that the Basketball Africa League (BAL), a partnership between the NBA and FIBA, will finally tipoff May 16th with all 26 games taking place in the Rwandan city of Kigali.

This is GREAT news for the NBA, FIBA as well as basketball players, coaches and fans from across the African continent! It is really going to happen! Congratulations to both the NBA and FIBA for their efforts in coming together to grow the game in Africa and push this project through, despite the many obstacles caused by the COVID-19 global pandemic.

This is also great news as there is still plenty of time for the NBA and FIBA to reconsider their questionable decisions regarding the naming, branding and imaging of the BAL before the first game is played.

Here is what I mean.

What? Just seems like a word or two are in the wrong order.

NBA Africa (NBAA) – this makes sense with the NBA’s involvement, yet it leaves FIBA out.

To me the Basketball Champions League Africa makes the most sense as it is the same competition as the European and Americas BCLs, the only difference is the NBA’s involvement.

I assume this is what FIBA wanted, but the NBA did not agree to it due to FIBA’s ownership of the BCL names, so they agreed to substitute Africa for Champions. Too bad, I am sure it could have been worked out.

The color black is not used in the logo. Why not?

The Universal Negro Improvement Association and African Communities League (UNIA), which was founded by Jamaican political activist Marcus Garvey in the 1920’s, defines in its constitution red, black and green as the Pan-African colors:

Ethiopia, one of the most prominent, independent and influential African countries uses the colors of red, green and yellow in its flag while many African countries have followed their lead upon gaining independence using the same colors in their flags.

Is it in the shape of an African war shield? If not, it should be! Yet the NBA/FIBA make no mention of that. Missed opportunity there to positively embrace the African warrior culture.

Who is the logo? Is the silhouette of Kobe Bryant or Michael Jordan? Or a combination of both so as to not actually (or legally) be one or the other? 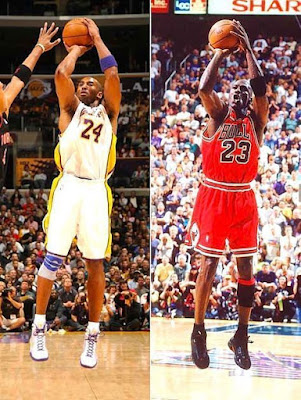 The NBA won’t, that’s for sure. They still won’t recognize that Jerry West, aka “The Logo,” is the actual NBA logo.

Keeping in line with that, the NBA really missed another great opportunity here by not using a silhouette of the first African to play in the NBA and current Hall of Famer Hakeem Olajuwon! 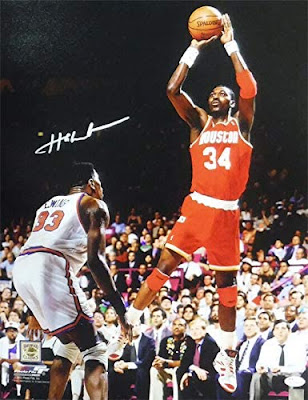 It makes total sense! Pay him whatever he wants. It is worth it, and he deserves it. I bet he wouldn’t even charge the league for the honor. Name him the honorary commissioner and/or league ambassador. The image could be of his famous dream shake or turn-around fade-away jumper.

This is the BEST that the NBA, FIBA, NIKE and Jordan Brand could come up with?

Seriously??? The same uniform for every team???

They have access to some of the best and most creative designers in the world and these are the uniforms that they came up with?

They look like uniforms for a YMCA over-40 league.

This is AFRICA! The land of color and vibrance! Dance and music! Diversity!
The uniforms should have been designed by known artists from each country using the colors, imagery and vibrance of their respective homelands.

Each uniform should be unique, colorful and pop. Not of one solid color with six of the 12 (half!) being black (with a white trim) and all using the same fonts.

Who is going to want to buy those and wear them to games or as fashion statements? No one, that’s who!
Here is some examples of African professional team uniforms. All unique and colorful. 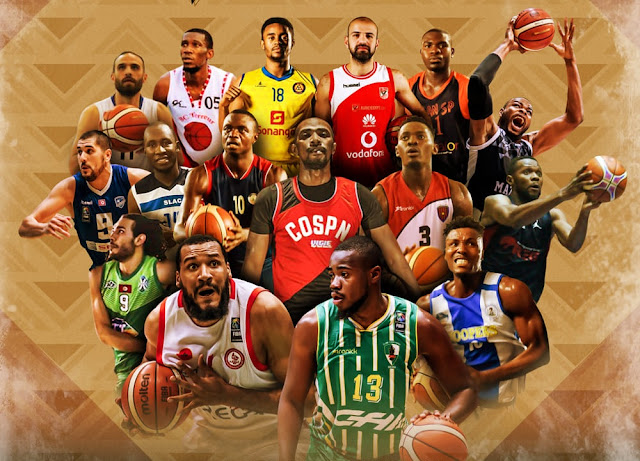 The names/letting they have decided to use on the uniforms needs to go as well.

For example, the Los Angeles Lakers have either Los Angeles or Lakers on their jerseys. They don’t have LA Lakers nor LAL.

The NBA and FIBA should also help the teams redesign, modernize and professionalize their team logos and websites.

NBA/FIBA it is not too late! You still have a month and a half to make the changes. Better follow-through, no more airballs.

Author Alan Walls is an American international basketball coach and administrator with over 26 years of experience on the youth, high school, NCAA, professional and national team levels in 16 countries and on five continents. Walls has worked with the national federations of Turkey, Romania, Palestine, Mongolia, Kenya and El Salvador as well as coached or conducted camps and clinics throughout the United States – including his native Hawai’i – Mexico, Costa Rica, Argentina, China, Hong Kong and Israel. Walls is the founder and Secretary-General of the United Nations of Basketball (2020 launch) and founder and President of the International Basketball Union (2021 launch).

Popular posts from this blog

By ALAN WALLS Welcome to the International Basketball Opinion, the only blog specifically dedicated to international basketball news, business and current events. “What's in a name? That which FIBA calls a competition by any other name would be as recognized?” – Coach Bill Shakespeare, head coach of the London Lords. During the pandemic many individuals and organizations have taken advantage of the free time to reevaluate their goals, mission and strategies. It is therefore a great opportunity for FIBA to reconsider its event naming and branding strategies. In 2002, FIBA launched their ONE FAMILY campaign which included renaming the five regional confederations and bringing them under the global FIBA umbrella. FIBA Europe FIBA Americas FIBA Africa FIBA Asia FIBA Oceania For competition purposes Asia and Oceania have since been combined and countries from the two regions complete in “Asia” events. Simple. Concise. Uniform. Yet, still 18 y
Read more

Panathinaikos for sale, jump from EuroLeague to Champions League?

By ALAN WALLS Welcome to the 12th edition of The International Basketball Opinion, the world’s newest and only blog specifically dedicated to international basketball news, business and current events. “The team must leave the EuroLeague and go to FIBA [Basketball Champions League].” Whoa! Shots fired! Will Panathinaikos BC, founded in 1919 (parent club founded in 1908), be the first to bail on the EuroLeague for the Champions League?  Will other teams follow suit? That statement was made Tuesday by the 38-time Greek league and six-time EuroLeague champion Panathinaikos BC’s owner Dimitris Giannakopoulos as part of his announcement that he is putting the team up for sale for 25 million euros ($29 million). Through the years Giannakopoulos, who took over control of the club from his father and uncle in 2012, has been critical of the EuroLeague’s administration and structure. As a result, the league has fined him on multiple occasions. "My family has put in
Read more